Introduction
Negotiation rarely appears on the academic curriculum, even though it is informed by respected authors such as Fisher and Ury, Wertheim, Covey, Parker and Carlisle and others. We have conducted many negotiation training programs across different cultures and different industries, and we believe it to be an important piece of the "jigsaw puzzle" of strategic execution (Click here for more on this aspect - scroll down the page to "Partnership Negotiation Skills").

At Harrison, negotiation is a core competence; you can be sure of a robust, constructive and thought-provoking learning experience.

​Negotiation is not another word for "selling".  Nor do we subscribe to the "traditional"  adversarial approach with both parties treating each other as opposition.  This occurs despite a stated "win-win" goal, since many negotiators pay lip service to the win-win approach.  In reality, such negotiations involve a clear concern for one's own needs but little concern for the other party's needs.  Hagar the Horrible, comic book character, and arch negotiator, illustrates this in the two cartoons below! 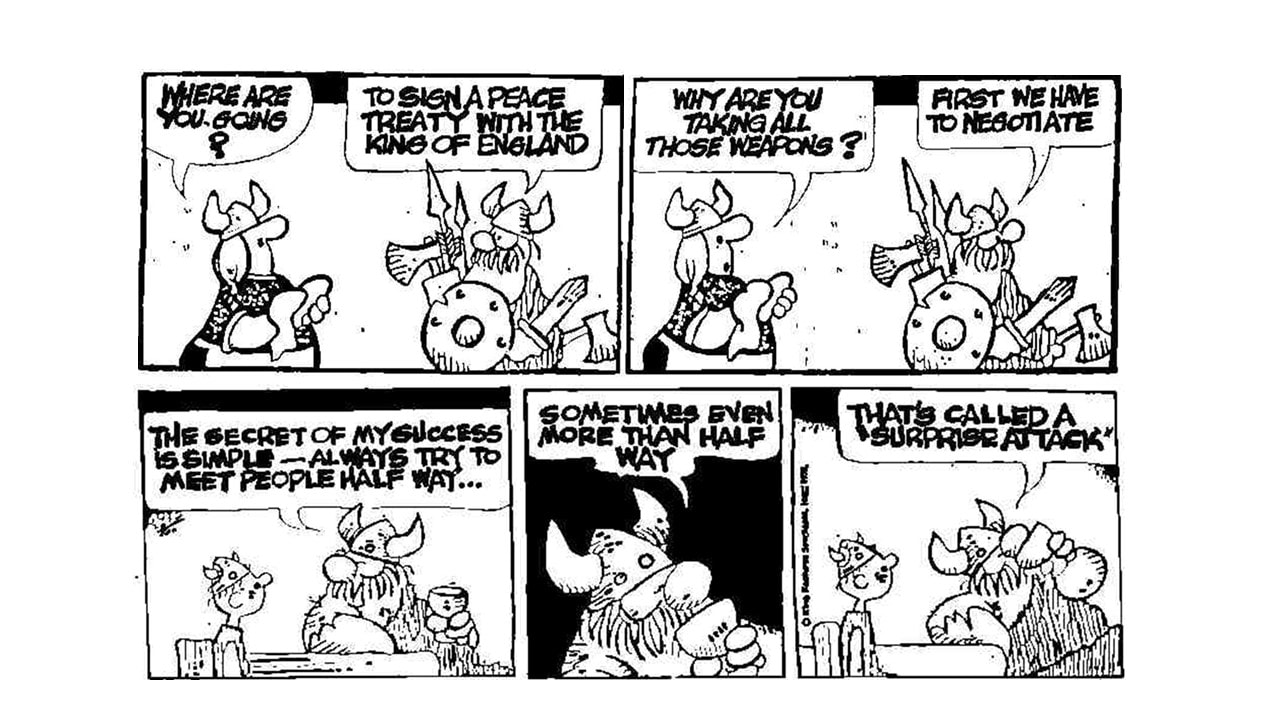 Negotiation seen as Conflict
Emphasis is almost always on short-term gain at the other's expense.  This short-term focus is reinforced by appraisal systems and KPIs for buyers that judge their performance based on short-term gain.  Such negotiation usually focuses on: This style does little to foster a relationship between supplier and customer, and has little or no consideration of long-term consequences for the relationship.  Interestingly though, there is still plenty of this type of negotiation around.

There is an important point here.  Even if your belief and intent is that this is not the best way to proceed, you will still need to be prepared for the pressure and manipulative techniques used by proponents of this model.  See our Blog post "7 Common Negotiating Tactics; 6 ways to say "No"!"
​
Negotiation seen as Cooperation
The Last Christmas Orange"
We recently published a longer paper on our Linked In platform, the fourth in our series devoted to practical applications of Simon Sinek's work.  It covers the true nature and process of negotiation in more detail than possible here.

It starts with the well-known parable about two sisters arguing over the last orange in the fruit bowl, originally attributed to American social worker Mary Parker Follett, (the "Mother of Modern Management"). With some editorial licence, we quote:
“On Christmas Eve the sisters are becoming increasingly adversarial in claiming they each need the last orange for their allocated recipes – one a glaze for the baked ham, one for a cake frosting, (author’s embellishment 😊). Their mother resolves the issue by chopping the orange in half. Both are disappointed, but feel at least that
a "fair" solution has prevailed.”
“That is, until both recipes fail, as each called for a full orange, one for its juice, one for the peel!”
For a robust discussion of this story and its broad implications for negotiation, click Negotiate from "Why?"